the-videodrome.neocities.org Manifesto
Been dragging my feet writing this, I got a domain over a year ago (even a .me domain that now has expired) and all that was completed was a shell of a site and a bunch of ideas that I’ve forgotten. So here’s the current plan. It will change, but at least something will be implemented. I wanted something professional and mystical like Brian O’Blivion, but that’s going to take forever and I’m not that good. So here’s my unprofessional, but hopefully informative spill on what this is.
I want this to be a site with one reviewer and only one reviewer, that way a reader will be able to look at my stuff and go “Okay this aligns with me, I can trust it” or “I only agree with some of the stuff, but because it’s only one person I know where we diverge and what I can agree with”. I don’t think a fully impartial review can work, unless you recreate a work inside a review so the reader knows what to expect, but even then a reviewer will inevitably cater to personal favorite elements. I might think this because I haven’t seen one work (the same reason people thought flight was impossible, until it was), but I’m going to split it in the middle and try to do both an impartial and person review/rating for things.
Introducing a 2 star system. Stars for technical perfection (out of 4) and stars for personal thoughts (out of 10). Techincal stars will be 4 for exceptional works, 3 for good, 2 for passable, 1 for poor, 0 for very bad. Personal stars will range from 1 to 10 with 1 being an absolute failure, 5 being average, 9 being the best. 10 will be used sparingly so the rating scale is even (4 for bad, 1 middle of the road, 4 for good). This split should help with wanting to rate something higher or lower than it deserves because of personal reasons.
Because there’s a personal element, here’s a bit about me. Almost 21, worried I have no drive, have no friends, worried I can’t communicate, studying computer science (game dev to be precise), worried I’m an idiot who’s just too arrogant to realize it. Like most people with bland personalities I really enjoy media, particularly foreign and weird stuff. Really interested in stuff about people stuck in roles, their interactions because of these roles, and things that force them to have these roles.
Here’s some movies that are of varying technical quality that are really crucial to me, and even if I wouldn’t say “This is my favorite movie” about them (except for Playtime which is literally flawless), they enrapture me for reasons I can’t comprehend. 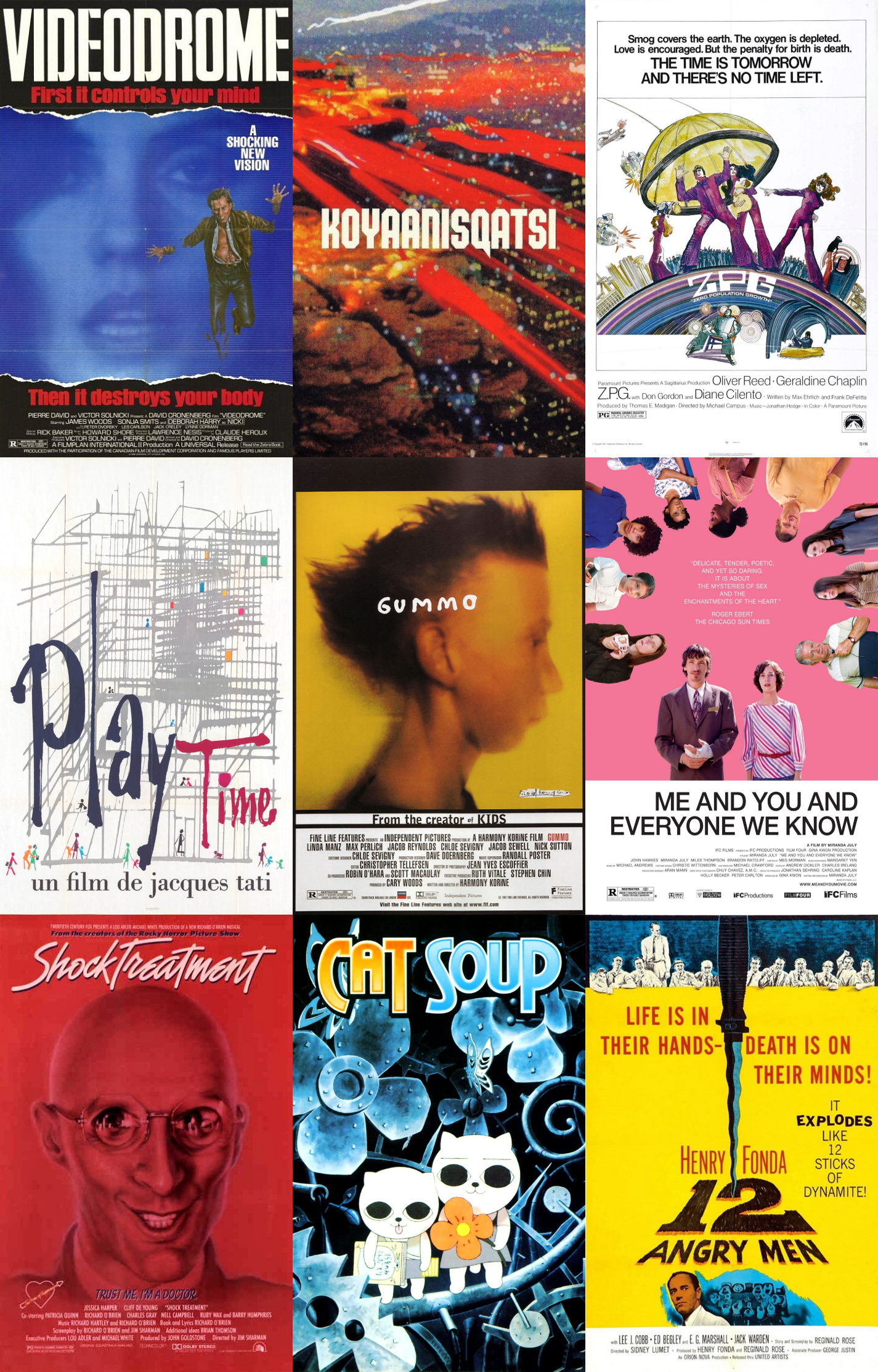 In the immortal words of Cat, “So what is it?”. (YEAH I PUT THE PERIOD OUTSIDE A QUOTE. TAKE THAT ENGLISH TEACHER) This is a blog about media. I’m going to review stuff, I’m going to put down my benign thoughts on things I think I grasp, I’m going to attempt to analyze things and figure out what makes them work, and look at the effects of media(s) on me. I’ve spent so much of my life petrified at what other people think of who I am as a person, isolating myself out of fear I’m not even sure what I am. So as O’Blivion talks about, let’s make an identity in the videosphere. Except not, because video editing is really complicated. Forming a sentence is hard enough, I don’t want to edit. With a sentence I have 33ish things to use. Video I have to pick a clip from an infinite pool, and do that 100 times? That’s hard. Sticking to this. Going to post words, make thoughts, do good. Ya.